MEDA staff was part of a mass gathering last night for a hallowed event at the Mission District’s Episcopal Church of St. John the Evangelist. The occasion? 33 youths, who some deemed did not have a prayer of getting into college, proved their naysayers wrong as triumphant participants in nonprofit Mission Graduates’ “College Connect” program. A joyous ceremony celebrated the transition of 25 high schoolers–donned in a rainbow of graduation gowns from various San Francisco educational institutions–into the start of their college careers. There were also eight others who had just graduated from prestigious schools of higher learning.

The advent of Mission Graduates was over four decades ago, when it began as more of an after-school program at the church. Mission Graduates today is an integral part of MEDA’s Mission Promise Neighborhood (MPN) initiative to take Mission kids on a successful cradle-to-college-to-career continuum. MPN family success coaches can enlist the services of Mission Graduates, one of 26 partners in the community, when a student is seen as at risk of not succeeding academically and lacking the initiative to go to college. Mission Graduates staff and volunteers mentor the youths, pointing them on the right path to achievement in higher education.

Two such volunteers have been MEDA Evaluator Elisa Baeza and Family Success Coach Lead Amelia Martinez. Baeza has volunteered as a writing coach, teaching students how to optimize their personal statements for college applications. She also acted as a mentor to steer a student onto a successful college path.

Martinez has mentored a trio of participants of the Mission Graduates program. Martinez explained how the “College Connect” program works: “You typically start mentoring youths when they are juniors. Almost all are the children of immigrant families. Mission Graduates attempts to match you with the student. For example, if the student aspires to go to Stanford, they’ll try to find a Stanford grad. If the student is interested in the sciences, they will attempt to find a mentor working in that field. It’s a powerful program that will help MPN reach its goal whereby every family succeeds and every student achieves.”

One challenging aspect of the Mission Graduates program is that these kids are the first in their family to attend college. While their parents want their kids to do well in school and go on to college–part of the reason they came to this country–these well-intentioned mothers and fathers generally do not have the understanding of the system to guide their offspring into academia. That is where community services, such as MPN and Mission Graduates, are vital to positive outcomes. 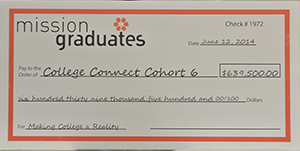 Mission Graduates takes into account more than just motivational aspects of academic success—there are always the monetary realities of higher education. These realties can be daunting for families that may be in financial dire straits. To meet this fiscal challenge, Mission Graduates extends the partner web by garnering funding for scholarships from other groups, to wit the $639K for this year’s 25 high school graduates (that averages over $25K per student).

Executive Director Eddie Kaufman, pride showing on his face as he spoke of this year’s graduating group, followed Marroquin. After two graduates of the program, plus one parent, shared their stories, guest of honor Sergio Romo took to the stage to be interviewed by Damian Trujillo of NBC News. It was only fitting that an athlete deemed one of the best closers in baseball would close out this ceremony.

First-generation Mexican-American Romo, a strong supporter of the nation’s estimated two million undocumented students having the chance to pursue their college dreams through “The Dream Is Now” campaign, talked of his humble upbringing in the sleepy farming town of Brawley in Imperial County. He explained that not many get out of Brawley, so much so that when he embarked to college in Arizona to play baseball he was told by a chorus of his hometown’s pessimistic denizens that “he would be back.”

“Oh, I did come back,” stated a soft-spoken Romo as he showcased his famous ear-to-ear grin. “I came back as the only Mexican with two World Series rings.”

Romo extolled the praises of his beloved father, Frank, who toiled in the sweltering Southern California lettuce, sugar beet and alfalfa fields.

“My father always supported me. He taught me self respect . . . to be the man I knew I could be,” stated a thankful Romo.

Perhaps the best piece of advice Romo gave was when he entreated the youngsters to never give up, despite the obstacles they will invariably face. It was interesting to see that in person Romo is a reserved man of relatively slight build for a professional athlete; this counters the emotional and physical prowess he demonstrates on the mound as he faces the best hitters in the game. Romo explained that he harnesses his emotion to counterbalance the obstacle of his lack of stature.

The greatest obstacle to Romo came when he was in college in Alabama and faced racism. His doting father would call him after each game to see how his son had fared that day, but, sadly, the younger Romo habitually started the conversation with heartrending details of the discrimination he was facing in the Deep South. 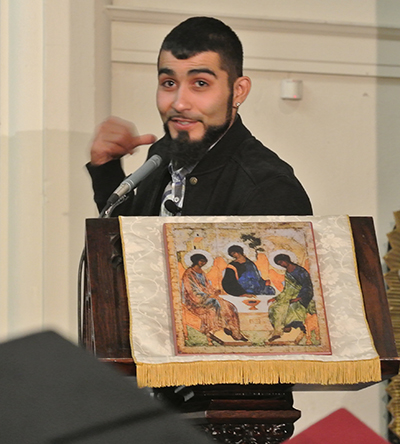 “Stand up for who you are. It starts with self-respect. Never quit and your dreams can become a reality, too,” Romo advised the graduates.

Their journey complete, these 33 young adults are poised to take on the world. This would never have been possible without the guidance of Mission Graduates.

MPN is proud to be partnered with this renowned organization doing such empowering work for Latinos in the Mission community. In the words of MEDA’s Martinez: “Since ‘it takes a village,’ MPN is lucky to have such a great neighbor!”