As the lead agency of the Mission Promise Neighborhood (MPN), MEDA partners with 26 nonprofit organizations and government agencies to launch a cradle-to-college-to-career continuum of services that empowers every Mission District family to succeed economically and achieve academically. MPN recently conducted an extensive neighborhood survey, details of which follow.

Why did you undertake the Mission Promise Neighborhood survey?
The MPN survey was a mandate of the federal Department of Education as part of the Promise Neighborhood Initiative. The goal is to understand how the initiative is affecting the community, since it is not just about the schools. How are things being impacted? After all, this is the place people live, work and go to school.

This survey is required every other year, with data gathered from residents living within the MPN footprint. This is the way to capture changes in perception in the Mission. Is my neighborhood safer? Are the kids thriving?

What was the biggest issue you faced in conducting this intensive survey?
It was difficult to find where people actually live. Many Mission residents live in overcrowded conditions. Also, because this is still a working-class neighborhood, it was difficult to find people at home during the day, when our surveyors were canvasing the neighborhood. To tap into the people in the most dire straits is difficult when they are out all day working at two jobs.

Another problem was how many students attending our four MPN schools no longer live in the Mission. Their families have moved, mostly because of financial issues, as the neighborhood has become all the more expensive. Here are the stats: of the 1,636 students enrolled in MPN focus schools, only 39% lived within MPN’s geographic boundaries, with 61% residing outside the boundaries.

Finally, the survey was conducting over five weeks, so you need to come up with ways to keep your workers and volunteers engaged in the project.

Who exactly were these workers and volunteers?
It was a comprehensive team. We had 50 staff volunteers from MEDA, 15 community volunteers, 10 youth workers and six promotoras/es. Promotoras/es are an integral part of Latino culture overseas and here in the Mission. They started as healthcare outreach workers, but that later expanded to being community teachers about such topics as education and domestic violence. Think of it as the “it takes a village” approach.

The promotoras/es are a great resource because they know how to speak to families, how to safely walk the streets and how to engage without influencing. The latter is vital when asking questions—we need unbiased answers.

What MPN survey question revealed the most surprising answer?
It was shocking to discover how many families put just about their entire paycheck toward rent. That is how expensive the Mission District has become. There is little or nothing to put toward savings. This creates an impediment to sending your child to college. 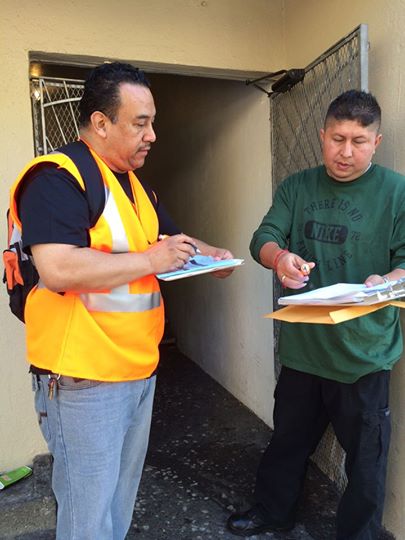 We were pleased to learn how committed parents were to their child’s academic success; however, many of the families have no idea how to help their child in this regard, from an economic side, but also from a logistical side. How do you apply for financial aid or a scholarship? Things like that.

Our data will be available in August, so my hardworking evaluation team looks forward to sharing it with everyone.

What improvements would you like to see for the next survey?
I would like to see more community involvement. While we were privileged to have 15 neighborhood volunteers, but it would be great to have more. I would like to take the survey to another level of community involvement in actual implementation. I know what we learned from 2014’s experience will help us garner even better data in 2016, so that our service-integration strategy can be honed.